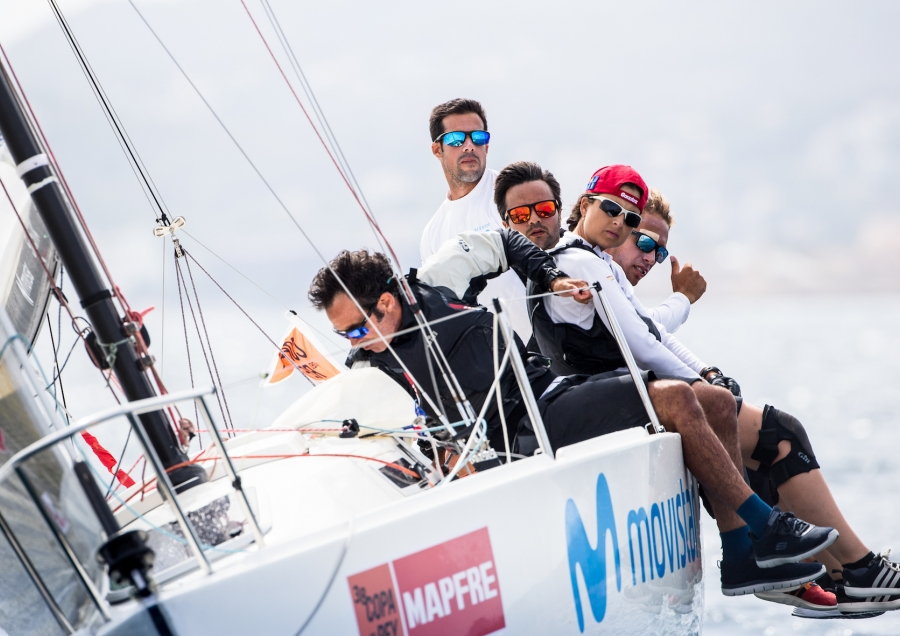 This is what we´ve heard today at the Real Club Náutico de Palma.

Bruno Zirilli, navigator of Cannonball in Mallorca Sotheby's IRC class:
"The first rule today was not to break anything and we were successful on that front. First race we were a bit conservative and were behind early on but managed to stay close and see of there was an opportunity for us but there was nothing. Second race there was a massive split, a scary split, we went bang the right corner and they banged the left corner. At the end we had a tiny little right hander and we crossed by only two boat lengths.
Bella Mente was faster today but not special in any one area. Downwind it is very hard to judge who is fast because it was very up and down, shifting back and forth. The scoring system is interesting but it will not make too much difference in this class. But in general this is the longest and hardest regatta of the year, and this way it all starts again near the end. Before, say in the TP52 it was nice if you got some points ahead you could be a little bit safer on the last day. Now? Well…let’s see…I will tell you Saturday."


Arnaud Psorafaghis, skipper of Alinghi in GC32 class:
“It was really gusty. We weren't thinking too much about capsizes but it was certainly tricky out there. It was a really good day’s racing. We didn't sail the first three races really well, but then the last two were really good and we sailed clear of the pack, got some luck with the windshifts.”

Tomasso Chieffi, tactician of Cuordileone in ClubSwan 50 class:
“We hate the new classification system. It keeps it interesting to the end but for the guy who gets well ahead iIt can be very unfair but, hey, it is what it is. Let’s see. Otherwise we had a good day with a second and a fifth. You can’t expect to win them all.”

Stephen Neve, skipper of Paprec Reciclaje in BMW ORC 0 class:
“ I think we are better when it is windier. Our manoeuvres were good and we had good speed downwind. It was not so good on the second race because we expected the wind to get lighter and we changed from the J3 to J2 and it didn’t so we were not good upwind in the second race.”