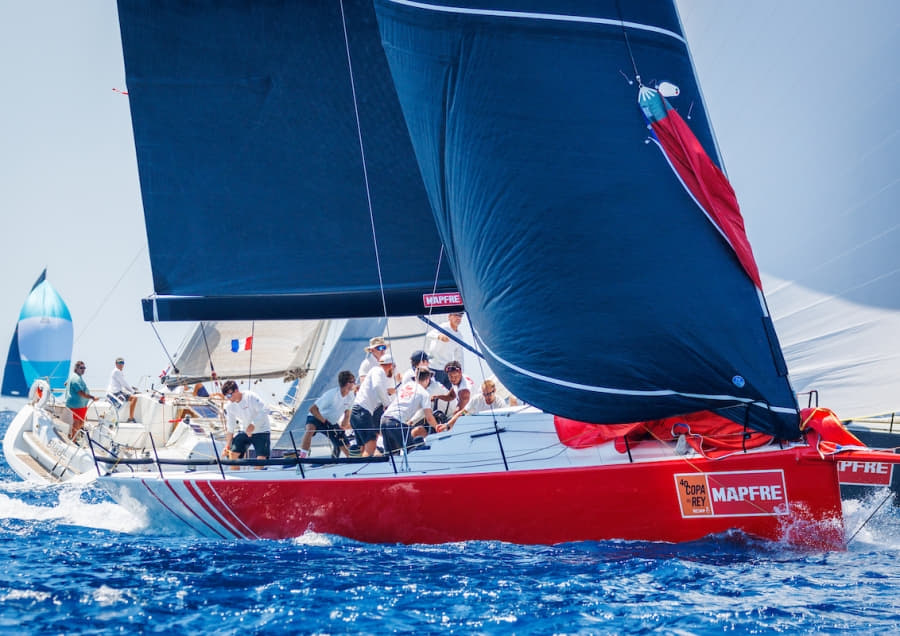 This is what they said on Day 1.

Jochen Schümann, tactician of OneGroup (GER), ClubSwan 50 class:
That is a good average result for us today, so we are quite happy. With the format here now that does not mean much but it does prove that we have prepared well and sailed well enough. It can work and it did. And so it can work for us, it did today but look around us and this fleet is now so tight. For us it made the difference today to get a free lane and then keep sailing in clear air to the top mark and then to get there in the top five or six boats you have then the chance to get top three or four, even if this time we missed the top three but still this in this fleet here we are being consistent and ending up leading like we are.
I think we saw Palma at its best today but it is just the beginning for the fleet and of course there is this preliminary series now.

Alan Smith, Red Bandit (GER), BMW ORC 1 class:
"We are finding our feet a bit for sure. We are trying to get locked in upwind. The mainsheet trimmer and Carl-Peter (owner-driver) are starting to learn to get the best out of the boat upwind. Our strategist has good comms with the owner and the navigator and they got a couple of good starts. We had a bit of a fight with Arobas downwind and we have close racing. They were a bit quicker downwind."

Sime Fantela, tactician of Goddess (GER), ClubSwan 36 class:
“The first one we won with a really good start, we were not first to the right and went more up the middle and we closed the group on the right and rounded second and then we gained on the first downwind. We have some good teamwork and the owner is happy this is the first time we open with the lead. We were second all the way round the second one but the Hungarians did an early gybe and they came in from the left to steal second. But we are happy we are quite a new team and this fleet is now pretty tight, you have to be special to win."

Javier Banderas, owner of Teatro Soho - Caixabank (ESP), BMW ORC 2 class:
"In the first race we tied with Katarina II. It's funny that we both arrived at exactly the same time, and that's why we shared 1.5 points for each of us. In the second race, when the wind was a little bit more stable, we had a lot of fun. This year the class is very fun, very competitive: there are three Swans in the fleet, but there are also other strong boats that we have to keep an eye on constantly. The truth is that Luis makes up for the shortcomings of many of us, but everyone is working together on board and sailing together for so many years has to pay off. The wind has been quite stable, and for us it is always a luxury to be able to sail in the bay of Palma. I think we got the perfect performance out of the day's conditions. The Cup has only just begun, and we hope to get to the last day as we are now."