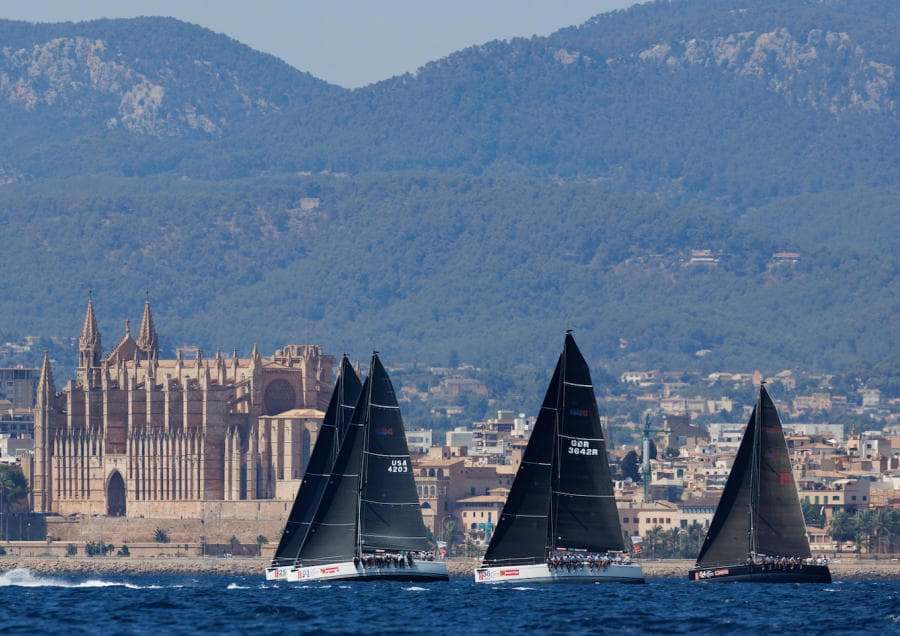 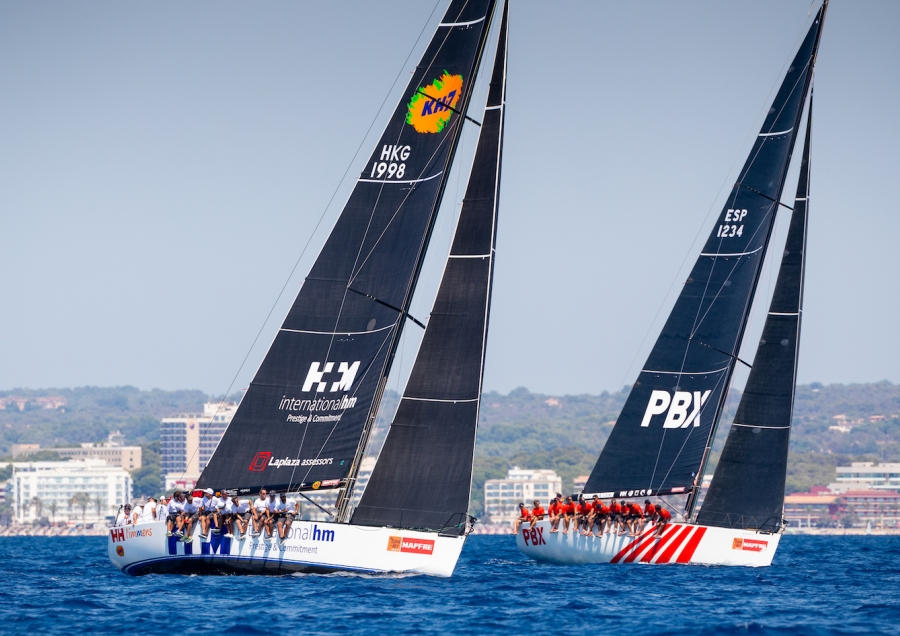 They lead the 21 boat BMW ORC Class 3 by a whopping ten points. But the regatta format, where it is the points from the position gained in the qualifying series which are carried forwards to the Finals from Thursday on, means that the biggest margin Scugnizza can hope to carry into the Finals is a single point.

Maybe the secret weapon on board Scugnizza is ace Italian navigator Andrea Visintini who last week finished second on Sled at the 52 Super Series on these same waters, won the 2021 series with Sled as well as the world championships.

“Today was very difficult, very shifty with different bands of pressure. And in general a light breeze, The water is too hot, the nice Palma breeze is not developing as usual. But the boat is going well and we have a nice crew.” Visintini said after racing: “Luckily I sailed last week with the TP52s here and so it is a little easier to understand what is going on. This is an all Italian team with two more guys from my home town Trieste and the other half is from Naples  and so it is a nice mix from the north and south of Italy.”

Success at Copa del Rey MAPFRE is not always about having top pro sailors on board. In the highly competitive ClubSwan 42 class Jerome Stubler on Raving Swan had the best day with a first and third. The owner-driver who races out of Saint Tropez has four family members – his two sons, Hugo and Oscar, daughter Domitille and wife Nathalie racing with him on what for the last six years has become a family odyssey to the Copa del Rey. Today they went 1,3 to lie third, tied on points with Canopo.

Stubler, who is president of a large French engineering group smiled, “It was a good day for us. We won the first won even with a terrible start but it just shows you should never give up. We were late and the door was closed at the boat end of the line and the door was closed. We came back and were second at the top mark. Then we went left with the spinnaker and led at the gate and we stayed there to the finish. We finished third in the second race but could have won other than a few little mistakes. We were first at the leeward gate but tacked there where we didn’t need to and ended up third.”

He added,
“We are progressively moving up the leaderboard. But it is good. This is our holiday sailing with my family, my two sons, my daughter and my wife. My three kids are all engineers too and we are here still working in maths and physics! We really started sailing together as a family at the Copa del Rey six years ago. When I was younger I did two Copa del Reys, 25 or so years ago, one in a Melges 24 and I sailed on a X45.  We have won our class here before.”

Without doubt the most Olympic medallists, America’s Cup and round the world race winners are in the star studded ClubSwan 50. After being over the start line on the first race yesterday, the defending Copa del Rey champions, Hendrik Brandis’ Earlybirdwere the joint best scoring team today – their 2,2 matched Marcus Brennecke’s double world champions’ 1,3.  The all German podium sees Stephane Heidenrich’s OneGroup still leading but only on the same 18 pts aggregate as Earlybird. Hatari is now third on 20pts.

Earlybird’s tactician, Australian double Olympic medallist Will Ryan is no stranger to the Bay of Palma – a multiple 470 class winner at each spring’s Princess Sofia Olympic classes regatta – but this is his first Copa del Rey MAPFRE, replacing his compatriot Tom Slingsby who won with Earlybird last year.

Asked how he felt about stepping into Slingsby’s shoes this week, Ryan replied, “I am taller than Tom so hopefully my feet are bigger and my shoes are bigger? But Tom is at the top of the game and at the cutting edge so it was fantastic to learn from him (they sailed together on Earlybird at the Swan OD Worlds) and to have him as part of the team and push us there to the highest level. And so now I hope we can reach the high expectations he has of us as a team. Our long term aim is to win the worlds.”

“It is difficult to get off the start line in these conditions and that is where I am trying to build my experience.” Ryan continued, “It was a lovely Palma day. Us as a team we are still always trying to improve and today was another step forwards. I know this team have been to Copa del Rey a lot of times and I have been to Palma many times but this is my first Copa del Rey. I am really enjoying it here and being part of a big team. On the Olympic journey it is usually just one or two people and so it is good to be here with a big team, getting the synergies right and making gains each day. This regatta is a bit of a marathon and of course it is the races at the end of the week which count for more.”

The ClubSwan 36s saw two different race winners today G Spot and Farstar but it is the latter, which has Portugal’s four times Olympian Alvaro Marinho calling tactics, which leads after a fifth and a first today. Farstar’s mainsheet trimmer Simon Sivitz  said “It was a hard day for us even with a 5,1. The first start I made a mistake with the mainsail and we were over the start. We had to come back and restart. The conditions were difficult with a lot of choppy waves. The wind was not strong enough for the chop and balancing the boat was difficult. The crew did an amazing job. The second race we did a great start and were second at the top mark, we gained on the run to lead and then we stayed there to win but it was tough in this fleet. Now we keep focused on the final day of qualification. This new system works better in a big fleet than for us with eight boats.”

In the BMW ORC 1 Class all three DK46s hold the top places, led by last year’s champions HM Hospitales which leads after a 1,7 today, owner Alexander Laplaza reported, “A good day, despite our stumble to seventh in the first race today. However, with the comeback to finish first in the fourth race, we are very happy to remain.”  BMW ORC 2 sees no change in the overall leader, Daniel Cuevas’ Swan 42 Teatro Soho Caixabank now having posted three firsts and an equal first. Skipper Javier Banderas said "I wish it was as easy as it looks by the results on paper but nobody should be confused because this is not decided. Today, for example, we had a tough tacking duel with Elena Nova, and we always have two boats with which we almost sail in real time: Katarina, who is second, and Elena Nova, third. It's true that we have four firsts, but each race is so different and the final phase is a different race".

Wednesday sees the final day of the Qualifying series before the Finals start Thursday.