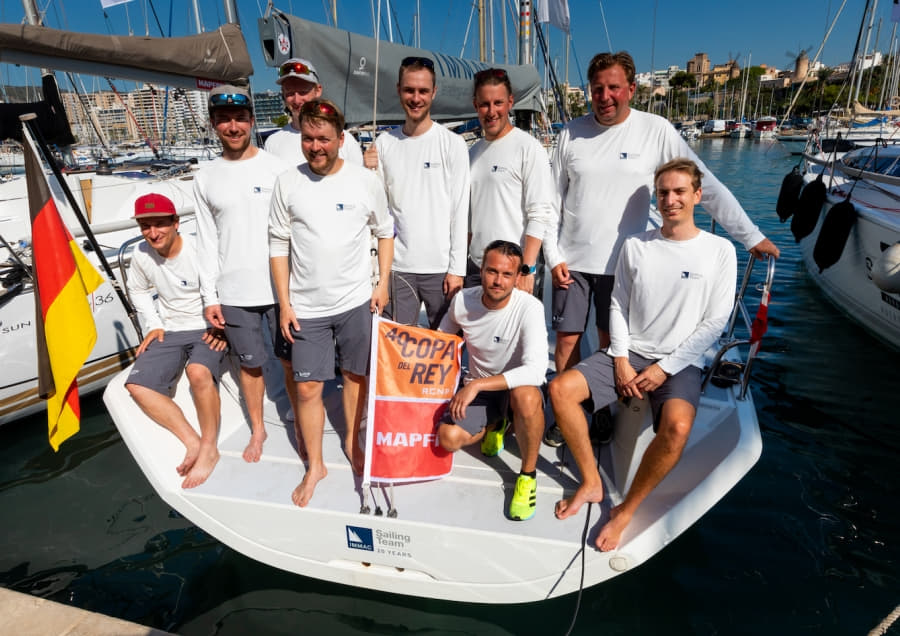 Lying second in BMW ORC Class 3 after four races, Immac Fram is the offshore team of the German Immac sponsored sailing programme which spans different sailing disciplines from the 2.4m class through Optimist, 29er, 49er FX and 49er to the big boat campaign, the Italia 9.98 which is here in Palma.

The sponsorship is by Immac Holding AG, a large investor in real estate particularly in the healthcare sector.

The Immac Fram team are based out of Kiel YC and have already been successful around their native northern Germany and the Baltic But this year, in search of a higher standard of ORC competition in advance of their tilt at the ORC World Championships which will take place in exactly one year’s time on their home waters in Kiel, they have chosen to base their boat in Palma and compete at PalmaVela and the 40th Copa del Rey MAPFRE.

They made a good start to this initiative when they won their class at PalmaVela in May counting a four wins scoreline but – as the smallest boat in ORC 3 - here they have found themselves up against some tough Italian competition in Scugniazza, an Italia 11.98.

“Our plan is to get some practice for the Worlds in Kiel next year and to sail in bigger, more competitive fleets", says navigator Magnus Mosilge. "So we were successful in PalmaVela and here we wanted to play with the bigger boats in ORC 3 and at the moment it is working quite well. The first day was tough with two fifth places but yesterday was better with two seconds.”

“We have sailed this boat together out of Kiel since 2017, most of the crew are the same, just one or two positions are changed. In 2018 we were second in the ORC World Championship in The Hague and we won the German Nationals and Kiel Week several times.”

“Originally we were all on a bigger Immac boat, a 49 footer, which was more of an educational offshore program. The core team stuck together and here we are. Now we are a semi-professional amateur team.”

This year is a special year for the Immac Sailing Team as it is 20 years since it was founded in northern Germany.

“We are finding it great here. It is hot, of course. The whole event is amazing, the sailing is great, it is great on shore. We can really recommend it.”