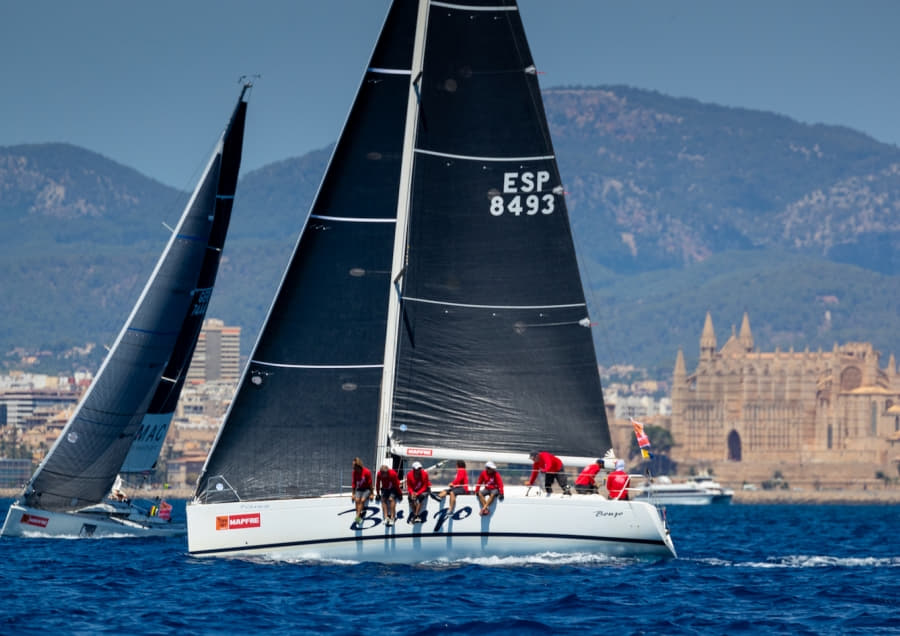 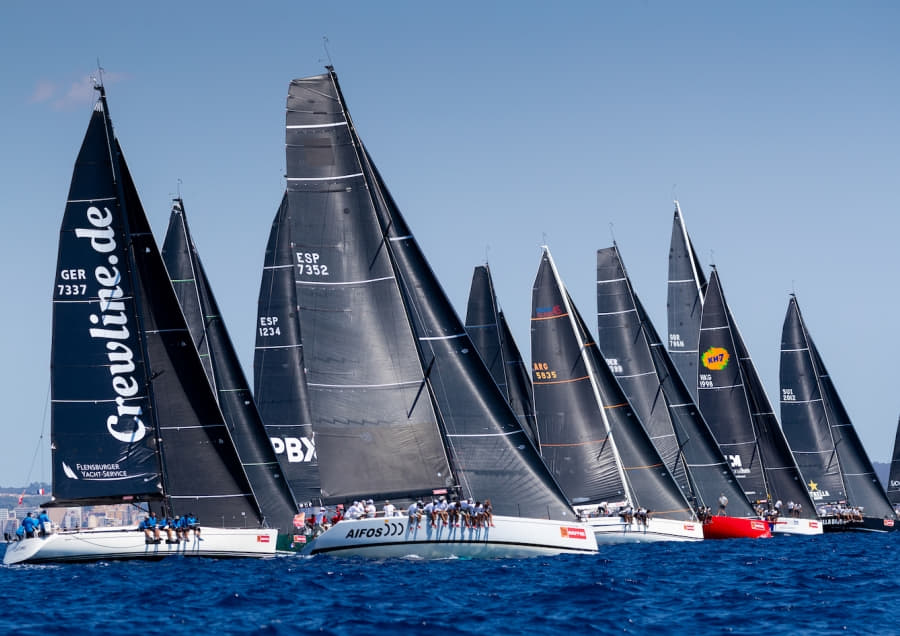 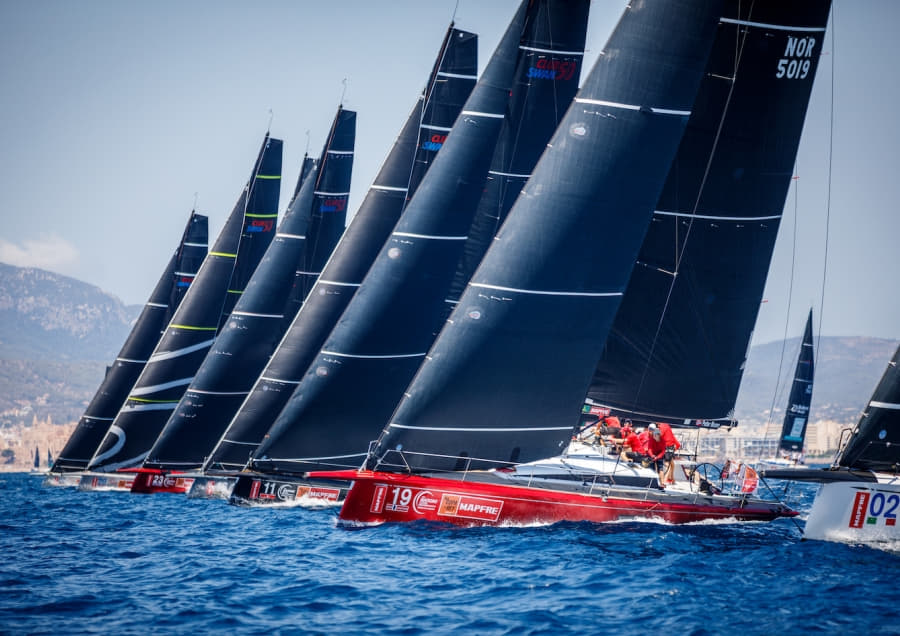 As the 40th Copa del Rey MAPFRE passed today into the Finals stage many of the class leads are cut right back to one or two points which should ensure an exciting finale on Saturday. Today sees seven of the nine classes with new leaders. In the highly charged 14 boat ClubSwan 50 class it is Stefan Heidenreich’s OneGroup which now holds a three points lead after Jochen Schümann guided the Swiss flagged crew, with the owner steering, to a first and a second today.

After a first and a second today the German triple Olympic medallist Schümann might rue ceding the lead of the second race to rivals, double world champions Hatari, in the final stages of the contest, but such a regret is minor compared to those of defending Copa del Rey champions Earlybird.

Earlybird found themselves trapped in the middle of a sandwich of boats approaching the inner ‘protector’ windward mark set to reduce the possibility of boats arriving directly to the windward mark on the give way port tack. For infringing the boat to windward and then not executing their penalty properly they had to do two penalties in total and dropped to 14th in the 14 boat fleet. Earlybird, class leaders into today, drop to fifth, 12 points behind OneGroup.

Earlybird tactician, double Olympic medallist Will Ryan grimaced on the dock, “After the penalty there was no way back, it was a very left side track and so it was tough after that. So I am not happy it is on me to avoid these decisions but there are still four more good races to come this regatta and I do think we are in a good position to be on the podium but we will go home and come back better tomorrow.”

Class leading OneGroup’s tactician Schümann said, “It was a fantastic day’s racing, our day was good but could have been better. We were leading the second race nearly to the finish. At some point we were not fast enough on the downwind so Hatari closed in and locked us out from gybing and so we got second, but first and second for the day is not bad. The fleet is very close it is all about getting off the starting line, getting the first little lane of pressure and the shift. And so anyone in this fleet could be first. The first race we did not go all the way right and some did and we got a nice little left shift to the mark which you sometimes get in Palma and we led but the top few boats were all within two boat lengths it was so close. And so it is hard to say what was right or wrong, it is boatspeed, it is pressure, it is just fine tuning.”

In the eight boat ClubSwan 36 fleet Lorenzo Mondo’s Farstar are also not three points clear at the top of the table. With Portugal’s four times Olympian Álvaro Marinho as tactician the team which finished runners up last year’s winners G Spot had a day which was very similar to that of their ClubSwan 50 class leading counterparts, rueing one small decision which cost the Italian boat their chance of a perfect score today, “We made a mistake gybe setting at the top mark, it was not so clear and we were leading and so we lost a bit on that.” Reported Marinho, “On the second race we put it all together. It was a tight race, we were second, first, second, first and went on to win. Last year we finished second this year it is going well but we don’t think about it. It is our second event this season and so we started late but I feel good here, this is one of my favourite places in the world to sail. I feel good here and the guys are doing a great job sailing the boat fast making my job easier.”

The ClubSwan 42 class podium could not be tighter, all three top boats Koyre-Spirit of Nerina, Canopo and Nadir are all locked on the same points tally, 9, with three scheduled races to go. After two second places today Nadir’s owner and skipper Pedro Vaquer said, “We changed a few settings since the World Championships and the way we sail the boat a little and we are going faster. We're more even now with the guys in front. In the second race it looked like there was a lot of wind coming in but it didn't hold up. In any case, everything is very tight and difficult; you don't win by one length, you win by less than one length. You have to be very concentrated, because there are no discards, and any bad result you score is irretrievable".  France’s Stubler family on their Raving Swan are poised one point behind the leading trio.

BMW ORC 1 saw leaders HM Hospitales, the DK46, sail a second and first today to lead by three points. Germany’s TP52 Red Bandit won the second race today and are in third. In BMW ORC Class 2 the new class leader is Aivar Tuulberg’s Estonian flagged Club Swan 42 Katarina II which landed two second places to overhaul Javier Banderas’ Teatro Soho Caixabank which has led this event since Day 1. And in BMW ORC 3 there is also a new leader in Federico Linares Grand Soleil 37B Brujo which aggregated 5pts today. There was controversy in BMW ORC 4 where seven boats were penalised for not sailing the right course not once, but twice in a row. After all were scored NSC in the first race – the only boat to follow the change of course in the second race – the Dufour 34 Pulpo Negro of Giampiero Giannetti is now the class leader.