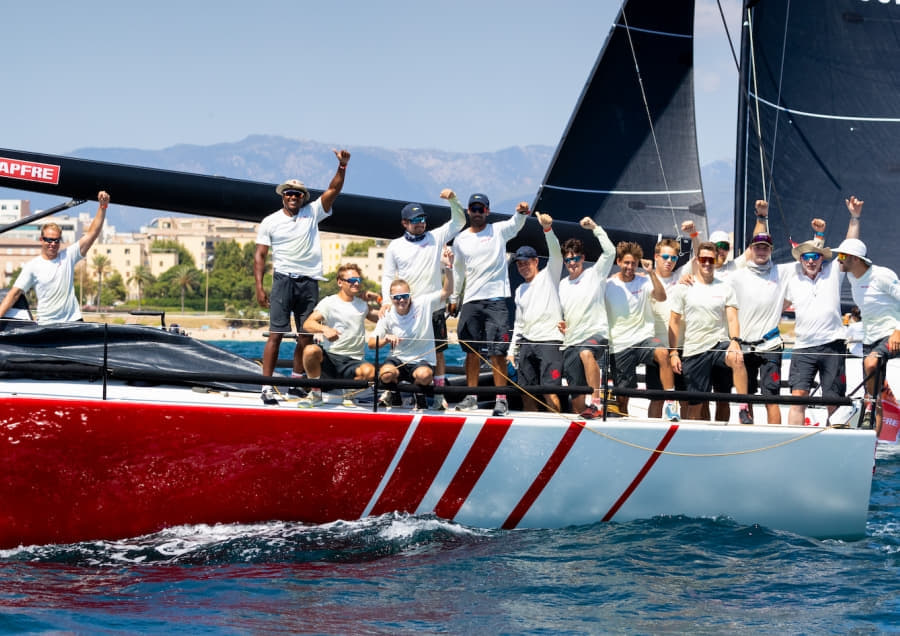 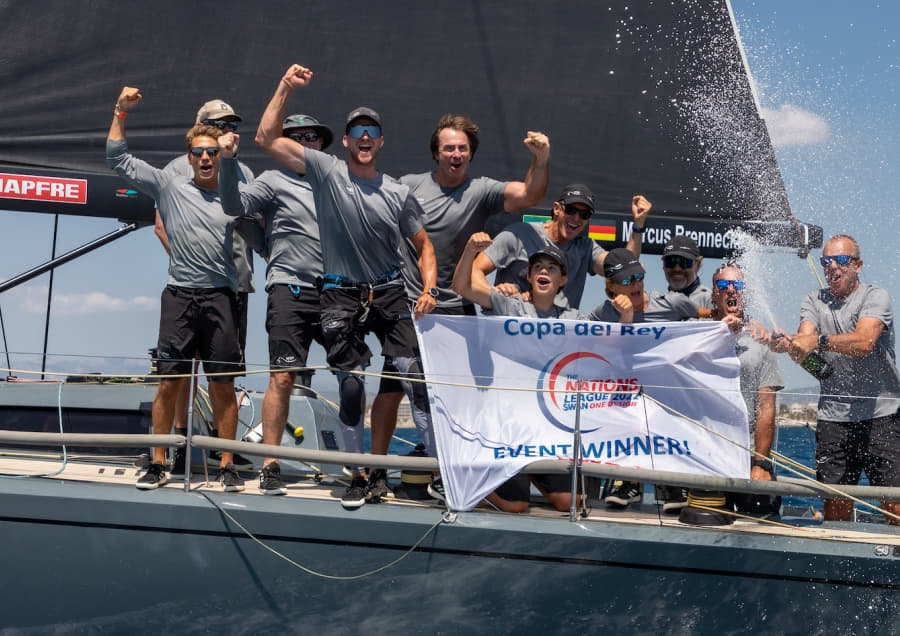 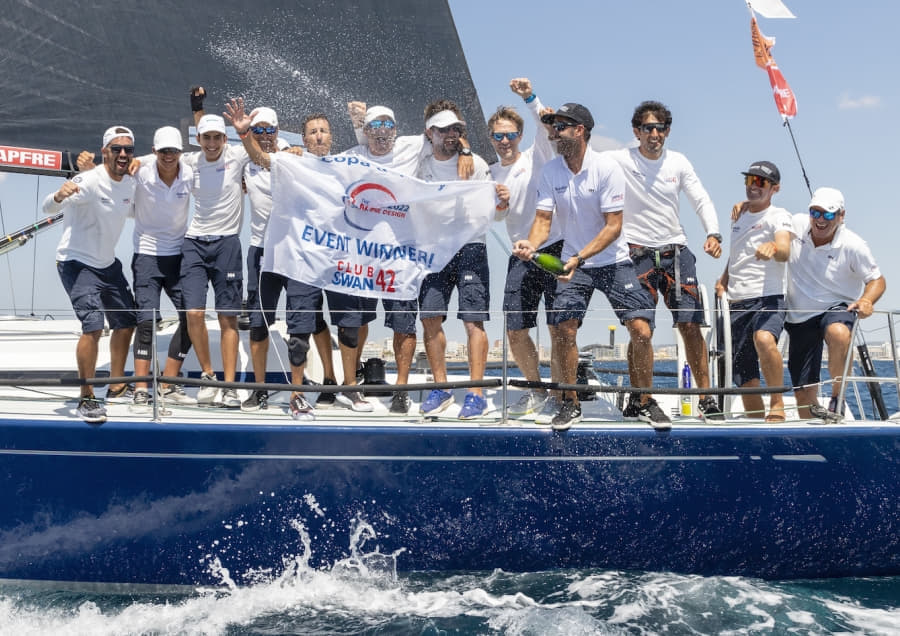 Marcus Brennecke’s ClubSwan 50 Hatari clinched the ClubSwan 50 class title on the final race at the 40th Copa del Rey MAPFRE but the German flagged crew endured some unnecessarily nervous moments after the nearest rivals Stefan Heidenreich’s OneGroup seemingly came back from the dead after being over the start line early.

From being a long way ahead of OneGroup, Hatari found themselves needing to cover their opponents to close out the prestigious title which last year eluded them on the final day by one single point at Mallorca’s summer showcase regatta.

“I am relieved, happy but relieved. We did not make it easy on ourselves and ended up having to keep a cover on them so it is good to win.” Smiled Marcus Wieser, German flagged Hatari’s tactician.

“We had to play it safe in the end which is a bit mad when we were third at the top mark and he was second to last, but we had to match them in the end. It was a good week, we have won three of the four events now this season, Scarlino, Sardinia and here but sadly not the Worlds and fourth at the worlds. I think last year we won the preliminary series last season and so this time we started defensively and caught up. It is a bit like match racing when you win the round robin and then lose the semi final.”
Brennecke said “Winning the Copa del Rey is great I am proud of the team and my son on board and I am very happy, it was close until the end in this great one design class.”

Hatari won by five points ahead of OneGroup which has Germany’s Jochen Schümann calling tactics whilst NiRaMo, of Sonke Meier-Sawatzki which had Cameron Appleton as tactician took third.

In the ClubSwan 36 fleet Giangiacomi Serena’s G Spot retained the title they won last year but this time they came from behind on the last day to overhaul Lorenzo Mondo’s Farstar which led the event from Day 2. A second with Farstar fifth was enough to give G Spot the overall win by a single point.

“We had our best race on the last day. We were in front of Farstar and managed to put one boat between us and them and that was enough.” Said Michele Paoletti, G Spot’s winning tactician, “It was much harder this year. The level in this fleet has gone up so much in a year it is incredible.”

In the BMW ORC Class 1 fleet it was Carl-Peter Forster and his young Bayerischer YC youth offshore programme team on the 2008 TP52 Red Bandit which prevailed, winning by five clear points, finishing 1,2,1,3 and overcoming a Race 1 DSQ to give a delighted owner his first win at his first ever Copa del Rey. The youth crew, led by eight times America’s Cup campaigner Kiwi Alan Smith, achieved the first class win here for the boat which started life as Mean Machine and was third and fourth in recent years as Freccia Rossa.

Owner Carl-Peter Forster enthused, “It is awesome, just awesome. With a young team they are so enthusiastic, they are super good sailors already and learning so much so quickly. It was brilliant. And the event is brilliant. After the protest we just said ‘OK it’s behind us, just let’s look forwards and move forwards. We knew this second phase could work in our favour and we could lose some of the big points. And these young guys are just awesome.”

Spain’s Pedro Vaquer's Nadir won the ClubSwan 42 class by five points, taking second in the final race. J80 world champion Rayco Tabares, Nadir’s tactician said, “It has been an interesting week for us. It’s not how you start the week but how you finish. The scoring format has benefited us, this year just the opposite of last year, when we went into the Final with a big lead and they cut us back, but this year it has benefited us because we hadn't made the cut very well. We have been changing things on the boat and the team has sailed at a very good level. This is my seventh Cup win and personally and I'm very happy.”

In BMW ORC 2 Javier Banderas won with the ClubSwan 42 Teatro Soho Caixabank. He said “We are on cloud nine, this victory is a great success because it has been such hard work. On paper it maybe looks easy in places but we have had races that we have won by just a couple of seconds. The key to this team is the years of sailing together. At the beginning we were getting hit from all sides, but we have worked very hard since then and the base of the team, which is from Malaga as well as Luis Doreste and Domingo Manrique, is the same as it was years ago. There are moments when just by looking at each other we know what each other needs.”

Enzo de Blasio’s Italia 11.98 Scugnizza secured the biggest winning margin of the regatta, 15 points ahead of second place in BMW ORC 3 whilst ORC BMW 4 was won by Germany’s Otto Pohlmann on his J99 Meerblick Fun. Pohlmann and his mixed German, Spanish and Kiwi crew also race in the 6 Metre, Dragon and a Classic.

“We knew going into today we had the lead and just had to do better than fourth. We had a good start and then could control the upwind. We have a fantastic team all from the club here in Palma” said Meerblick Fun’s Sam Francis Hume.

In the Herbalife J70 class the title went to Alcaidesa Marina skippered by Gustavo Martínez Doreste whilst the Sotheby’s Mallorca Women’s Cup went to the local Balearia team of María Bover.

Balearia took the overall Copa del Rey MAPFRE title for the one designs, and in the corrected time divisions it was Teatro Soho Caixabank.