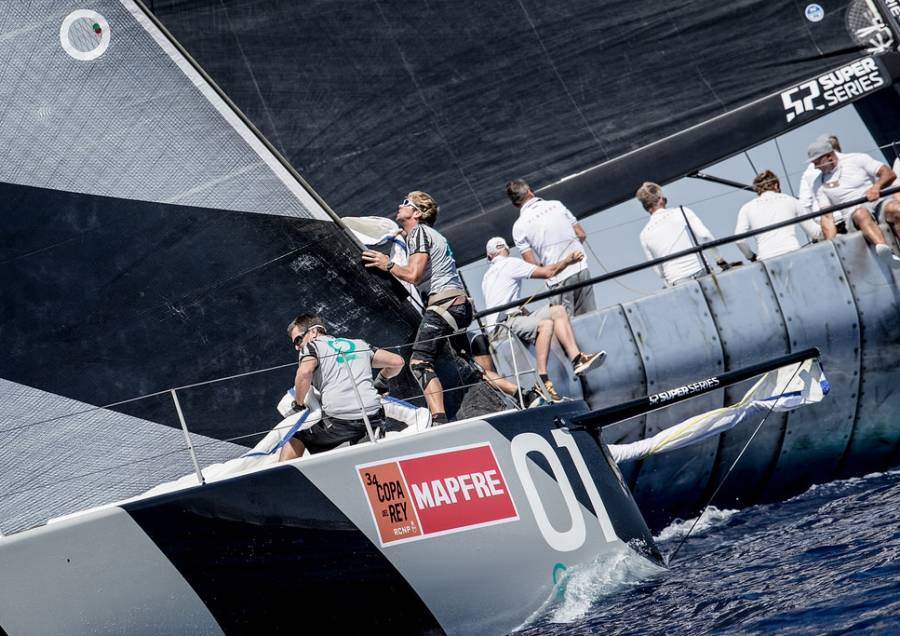 The Real Club Náutico de Palma is already in racing mode. 136 teams from 23 nations wait in their moorings to compete tomorrow in 34 Copa del Rey MAPFRE, the edition with the largest participation ever.

The battle for 34 Copa del Rey MAPFRE starts tomorrow. Today the competitors’ registrations were finalized in the Real Club Náutico de Palma (RCNP) and most of the fleet took the opportunity for training on the race course where they will compete, until next Saturday, for the 2015 title. Historical participation 136 teams from 23 different nations have replied to this year’s call, setting a new record of participation in the 34 years of history of the event. The previous record was established last year in 120 boats. "It is the famous bar" said Javier Sanz, RCNP’s president. "It`s like the high jump: we are at the 2.80 and it seems we won’t be able to reach the three meters, but we keep going up. At some point we will have to stop, but now that the bar is so high, it will be difficult. Personally, I think that 140 or 150 boats is the ideal number, especially for the type of regatta we want to have.” Six days of racing The fleet will compete divided into eight classes. Tomorrow six of them will debut: Gaastra IRC 0, Rías Baixas IRC 1, BMW ORC 1, BMW ORC 2, Air Europa X-35 and Herbalife J80, with windward/leeward races scheduled at 13h00 local time. Classes TP52 Super Series and Singular Kitchen Soto 40 will sail their non-scoring practice races, and will wait until Tuesday to officially start racing. The weather forecast foresees good conditions for the competition, at least during the first four days, as Gaspar Morey, PRO, indicated: "We expect a gradient from the East, which means that at least until Thursday it will blow an Embat between 9 and 16 knots from south-southwest." Five teams will dock out to defend the titles achieved in 2014: Americans "Shockwave" (which will compete as "Ran V" in Gaastra IRC 0) and "Quantum Racing" (TP52 Super Series), Spaniards "Rats on Fire" (BMW ORC 1) and "Movistar" (BMW ORC 2), and Italian "Lelagain" (Air Europa X-35). Among the fleet of Copa del Rey MAPFRE there will be plenty of talent, a magnificent combination of world, Olympic and offshore champions, together with amateur teams crewed by non-professional sailors. "Duende 52" at the starting line Jacinto Rodríguez’s TP52 "Duende 52" will also be at the starting line of Rías Baixas IRC 1 class. The owner of 84 years fell overboard in the early hours of yesterday and spent more than four hours lost in the waters of Palma. "I’m ready for the race tomorrow," he said today during his visit to the RCNP after being discharged from the hospital. "I feel strong enough, although my leg hurts a little, but is enough for steering the boat." Last night: Solidarity Success The social program of 34 Copa del Rey MAPFRE started last night with the celebration of the I Charity Gala, organized by the group Quirónsalud, whose donations are designated to the Melanoma research project carried out in the Hospital 12 de Octubre in Madrid. The actress Carolina Cerezuela was in charge of presenting the gala. Other Spanish celebrities like Norma Duval, the singer Chenoa and former tennis player Carlos Moyá, as well as the Minister of Health of the Balearic Government; Patricia Gómez also joined the gala. Today: The Mallorca RCD and their brand new kit in the RCNP This morning, the squad of the RCD Mallorca visited the RCNP to present their new kit for the 2015-16 season thanks to Air Europa, sponsor of the team and Copa del Rey MAPFRE. Javier Sanz received a shirt commemorating the centenary of Real Mallorca from the team’s president Utz Claasen, who emphasised that "the Real Club Náutico de Palma is already a Champions club, and to present here the shirt is a great opportunity and also a great gesture by the club and its president." Morning: First chapter on shore Tomorrow the daily schedule of activities on land will open. The Crew Village will host the competitors from 9h30 in order to charge batteries with fresh fruit Zespri to have breakfast. The Restaurant El Náutico will host the morning Iberostar Brunch with the presence of Top Chef Marta Roselló, and in the afternoon the Singular Kitchen Show, which tomorrow proposes a master class on creating bonbons by expert baker Antonio Merino. From 17h30, the Crew Village will open again to the competitors, who will enjoy music by Pachá and refreshments to top off the first day of racing.